During past years Don S. Shoemaker´s work has been presented at several Mexico Modernism designer exhibitions. Worth mentioning: “Vida y Diseño. 125 años del diseño en México” (Life and Design. 125 years of design in Mexico), which took place at the Palacio de Iturbide in Mexico City from December 2009 until the end of February 2010. This exhibition showed a selection of Don S. Shoemaker furniture pieces among works by other 20th century Mexico Modernism designers. Although I was disappointed by the poor research work done about Don S. Shoemaker, the furniture pieces on display were dated to have been produced during his childhood in the 1930´s and 1940’s…. Don did not establish himself in Mexico until 1947, later he made acquaintance with precious woods and he became so fond of them that he moved to Morelia, Michoacan marking the beginning of his production of furniture pieces in tropical woods until the early 1950´s.

This original folding chair is made in solid cocobolo wood with nicely worn black leather upholstery. You may consider a weekend visit to the MAM to study this wonderful Don S. Shoemaker furniture piece. 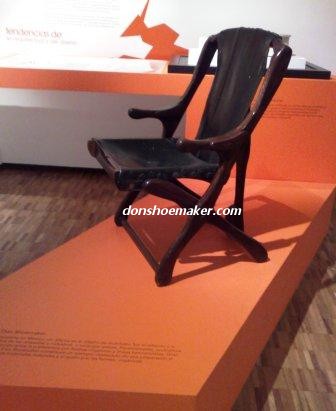