Po Shun Leong´s interesting story (Part #2) on how he met Don S. Shoemaker in Mexico since the 1960’s and how this friendship influenced his career:

In 1981 we left Mexico and settled in California just before the deep recession began. It was as though life had stopped still. I lost contact with Don.

In California I began making little functional band sawn boxes from off-cuts or locally found wood, like Don’s “Organic Design Box”. We spend many a weekend selling our handicrafts in local craft fairs. Gradually with more confidence, the work evolved to beyond being merely functional becoming dramatic in expression as one-of-a-kind objects, inspired from the legendary places of the world such as Uxmal, Machu Picchu or Rome. 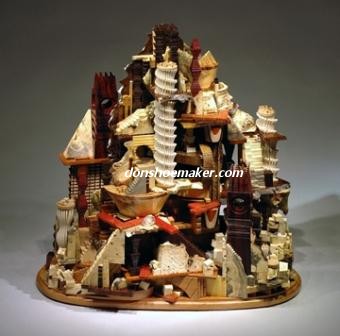 Thanks to Don’s earlier encouragement and direction it only took a few short years to become a completely independent studio furniture maker in the Los Angeles area. My work has been shown in the top shows, galleries and is in various permanent museum collections.

In 1989 or 1990 I was exhibiting my work in a show organized by the Smithsonian Institution in Washington DC when an elderly man in a wheelchair came into the booth, accompanied by a woman, his daughter. He looked around and saw my name on the wall and remembered me from years back. Not long afterwards he passed away. His daughter purchased one of my art furniture pieces in his memory.

Last year I had the opportunity to participate in the “Vida y Diseño en Mexico” exhibition with some of my furniture from Mexico and was especially honored to be in the same place as Don.

P.S. I remember Don saying that he was good friends with the Cardenas family, especially Lazaro Cardenas. I used to be in friendly contact and work with Doña Amalia, wife of the ex-president and her sister Virginia. They had a home in Tacambaro. Doña Amalia headed a charity program in Oaxaca which she visited every year and I had designed and made hundreds of children’s furniture that she donated to the nurseries. I accompanied her in those trips. When I hurt my leg they gave me a walking stick to get around on. I still keep the stick in my car, just in case.