The palo fierro dominoes sets from the Seri natives

Some time ago I published a post on Don S. Shoemaker´s dominoes sets. These game sets were made in 2 different versions: the “tronco” (organic design box) and the boxed sliding lid models; the former also had a first series with a matching wood lid and the ones produced by George with a see-thru fiberglass lid.

This time I have to bring your attention to these wonderful Mexican handcraft dominoes sets made in ironwood (“palo fierro” for the locals) by the Seri natives in the northern state of Sonora, Mexico. The “palo fierro” handcrafts include boxes, sculptures, jewelry, etc., they are of a great artistic value and a source of income for this isolated community. So, I ask the help of all my readers to buy these look-alike dominoes sets and the other handicrafts directly from them and help also to stop the swindlers that are selling these dominoes sets as Don S. Shoemaker originals.

Take a close look at the differences between an authentic Don S. Shoemaker “tronco” dominoes box vs. the beautiful dominoes set interpretation from the Seri natives: 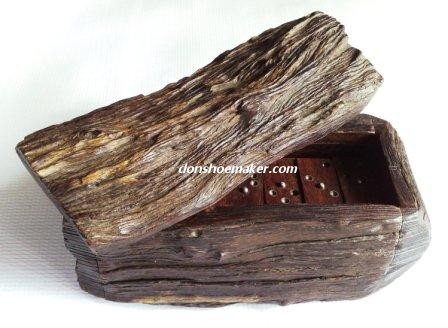 Don is going to be proud of you guys because as you know, he was always involved in Charity programs.