Thonet was established in 1819 by Michael Thonet. Michael Thonet‘s work is synonymous of the transition from craftsmanship to industrial furniture production. His breakthrough towards industrial production took place in 1859 with “chair No.14”, later called the „Vienna coffee house chair“, using the innovative technique of bending solid beech wood.

The Thonet family perfected the mass production formula for bentwood furniture based on an assembly-line and implemented for the first time the concept of labor division to furniture production. ”Chair No.14” paved the way for Thonet to turn into a global enterprise. Other bentwood designs followed and became icons of design history: the rocking chair No.1 from 1860, in the late 19th century the successful models No.18 and No.56, around 1900 the elegant chair No.209 with its curved armrests and the art nouveau armchair 247 by Otto Wagner, the so-called „postal savings bank chair,“ in 1904, to name just a few. Production peaked in 1912, when 2 million different products were manufactured and sold worldwide. Just to give you an idea, Thonet had sold 30 million No.14 chairs by the 1930’s and to date nearly 60 million (without counting the plagiarized versions)…. Chair No.14, today known as 214, is still produced by Thonet.

The 1927 Werkbund exhibition „Die Wohnung“ in Stuttgart, Germany was an important milestone for Thonet‘s development of tubular steel furniture. The public was presented for the first time with tubular steel furniture on a large scale, including designs by BAUHAUS instructors Mies van der Rohe, Marcel Breuer and Mart Stam, among others. At first, the new and innovative tubular steel furniture proposal was received rather coolly by the general public, but finally, as a result of Thonet‘s involvement supported by attributes like a well known company to a broad public, inventor of the lightweight and cost-efficient bentwood furniture, appreciated by avant-gardists like Adolf Loos and Le Corbusier and the engagement in the emerging subsidized housing concept, the tubular steel concept took off on an entirely new dimension and distribution.

With the clever acquisition of Marcel Breuer and Kálmán Lengyel‘s tubular steel business “Standard Möbel” (including Marcel Breuer‘s designs rights) Thonet began producing tubular steel furniture in 1929. During the 1930’s the company developed into the world‘s second largest producer of tubular steel furniture with the cooperation and the designs from famous architects like Mies van der Rohe, Marcel Breuer, Mart Stam, Le Corbusier, Charlotte Pérriand and Guyot. A perfect example of the new material benefits is the CANTILEVER CHAIR, enabling designers to spare the back legs for the first time and becoming one of the most important inventions in furniture history. By 1934 Rietveld will show the world with the Zig Zag chair that wood was also fitted to produce a chair with fewer legs but of course, at a much more higher expense.

Le Corbusier admired both the designs and the industrial processes of the Viennese furniture factory Gebrüder Thonet, which turned out millions of bentwood chairs in the 19th and 20th centuries. Le Corbusier´s Chaise Longue LC4 was first put into production by the French division of Thonet who, in all probability, constructed the first prototype. The structure of the undulating seat and supporting tubular steel arc in this chaise is thought to have been inspired by Thonet’s famous bentwood rocking sofa of around 1883. In the early 1930’s it was produced under Thonet license by the Swiss company Embru. Le Corbusier´s Chaise Longue in its present form was reintroduced in 1959 by Heidi Weber of Zurich who worked on the re-edition directly with Le Corbusier.

Another good example is the LC7 Swivel chair, designed in 1929 by Le Corbusier, Charlotte Perriand and Pierre Jeanneret, a descendent of the Thonet bentwood swivel chair of 1900. As with all of Le Corbusier models, it was produced by Thonet, Paris. The Thonet French production lasted until 1932 or 1933 when the French company was shut down and production transferred to Germany. In 1964, while Le Corbusier was still alive, Cassina S.p.A. of Milan acquired the exclusive worldwide rights to manufacture his furniture designs. Today many copies exist, but Cassina is still the only manufacturer authorized by the Fondation Le Corbusier. 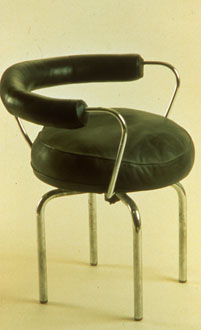 The list of designers who have worked for Thonet during the past 60 years is very long. It includes among others Egon Eiermann, Verner Panton, Eddie Harlis, Hanno von Gustedt, Pierre Paulin, Ulrich Böhme and Wulf Schneider, Alfredo Häberli, Christophe Marchand, Lord Norman Foster and Piero Lissoni.

Today Thonet continues with the prodution of many of the tubular steel and bentwood classics and introduces products by renowned contemporary architects and designers such as Stefan Diez, Naoto Fukasawa, Hadi Teherani, Delphin Design, Lepper Schmidt Sommerlade, James Irvine and Glen Oliver Löw.

Other iconic pieces of the modern furniture movement like Marcel Breuer´s Wassily Chair, Mies van der Rohe´s Barcelona Chair, the Eames Lounge (670) and Ottoman (671) and many others, share similar stories which I will discuss in these series of posts. They have been mass produced by KNOLL International and Herman Miller for decades. More recently the Chinese market, as well as other European companies, have begun making direct copy knockoffs.

In the last 40 years these iconic designs have decorated from the waiting room of your doctor to airport lounges, hotels, restaurants, boutiques, corporate offices, shopping malls and sometimes flats and houses in an omnipresence form in which the proud owners think that they have a precious and “exclusive design”. Yeah, right! As “exclusive” as the most appreciated inheritance from your great-great grandmother, the famous „Vienna coffee house chair“ that occupies an important place in the home of another 30 Million individuals.

The truth is that decorators and interior designers have used and abused the proven formula of one LC4 Chaise Lounge here, two Barcelona chairs there and a table and some chairs by Eero Sarineen, and some other combinations with Wassily chairs and Eames designs to the point where they become ubiquitous and if you own these furniture pieces you feel at home at office, at airport, at shopping mall, at doctor, etc. wherever you are. Sorry – mass production syndrome.

Funny thing is that the only involvement of many of the great names from the 20th century furniture design was THAT – only designing it and letting someone else to build the icon using the preferred tools of that century: mass production, cost control, large distribution network and of course, marketing to make the customer believe in the exclusivity of the product.