American Furniture company Herman Miller was founded by D.J. De Pree, who bought the “Michigan Star Furniture Company” in 1923 with his father-in-law, Herman Miller, and a small group of local businessmen. The company originated in 1905 as the “Star Furniture Company”. Initially they produced high quality furniture, especially bedroom suites, in historic revival styles. Hard pressed to stay in business during the Depression of the 30´s, D.J. De Pree gambled on contemporary furniture designed by Gilbert Rohde. 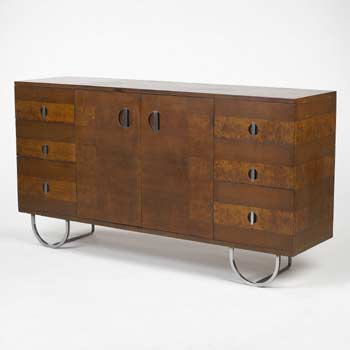 In 1945 D.J. De Pree convinced George Nelson to become Herman Miller’s Director of Design. That same year the first George Nelson produced Herman Miller Catalog started a collaboration that would result in some of the most famous home furnishings of the 20th century. Ray and Charles Eames, Harry Bertoia, Richard Schultz, Donald Knorr and Isamu Noguchi, all worked for Herman Miller. Although both Bertoia and Noguchi later expressed regrets about their involvement, it became a uniquely successful period for Herman Miller and for George Nelson.

George Nelson had already drawn popular attention since the 1940’s with several innovative ideas. In his post-war book co-authored by Henry Wright “Tomorrow’s House”, he introduced the concept of the “family room” and the “storage wall”, which had caused a sensation in the furniture industry and had attracted D. J. De Pree´s attention. The nature of the contract that Nelson signed with Herman Miller allowed him the freedom to work outside of Herman Miller and the use of designs from numerous other architects he had worked with. From 1946 onwards Nelson also ran his own design office, creating numerous products that are now regarded as icons of mid-century modernism. Nelson founded George Nelson & Associates in 1955; the design office had a lot of design talent during its glory days. Designers who worked for the office included Irving Harper, Charles Pollack, Bill Cannan, George Mulhauser, Robert Brownjohn, Gordon Chadwick, Bill Renwick, Suzanne Sekey, Ernest Farmer, Tobias O’Mara, George Tscherney, Lance Wyman, John Pile and others. At one point Ettore Sottsass worked at his office, later he became an icon in his own right when he co-established the radical design movement “Memphis” in the early 1980’s.

George Nelson & Associates worked with Herman Miller for over 25 years. Among George Nelson´s best known designs are the Marshmallow sofa, the Coconut chair, the Catenary group, his clocks and many other products. 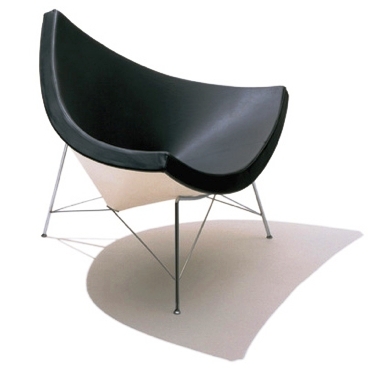 George Nelson together with the duo Charles and Ray Eames are among the most important American designers of the 20th century. Like many modernists, the Eames believed that affordable, mass-produced, well-designed furniture and objects for the home were tools that could bring about an environment ripe for social change and betterment. The Eameses brought new materials, new processes, and a new attitude to interior design.

In the early 1940´s, when Charles Eames was working on MGM set designs, he and Ray were experimenting with wood- molding techniques that would have profound effects on the design world. Their discoveries led to a commission from the US Navy to develop plywood splints, stretchers, and glider shells, molded under heat and pressure that were used successfully in World War II. When the war was over, Charles and Ray applied the technology they had created to making affordable, high-quality chairs that could be mass-produced using dimensionally shaped surfaces instead of cushioned upholstery. In 1946, Evans Products began producing the Eameses Molded Plywood furniture. Their Molded Plywood Chair was called “the chair of the century”. Soon production was taken over by Herman Miller, Inc., who continues to produce the furniture in the United States to this day. Their collaboration with Herman Miller continued and extended to VITRA International, Herman Miller´s European partner. 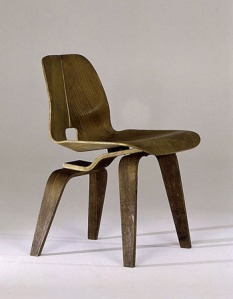 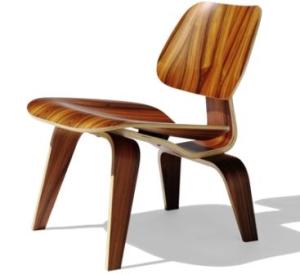 After plywood, the Eames focused on equally zealous experiments with other materials by creating furniture in fiberglass, plastic and aluminum. The first mass-produced plastic chair was the Eames Molded Plastic Armchair with Rocker Base, an iconic piece of mid-century modern furniture, introduced in 1948. Herman Miller is still producing today the Eames Plastic Chair collection. 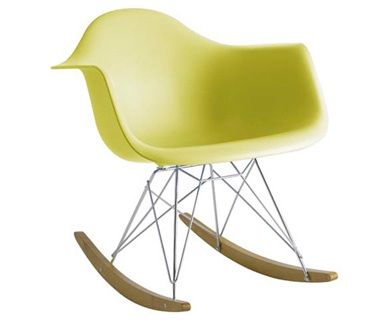 Among the first cabinet pieces to be mass- produced was the Eames Storage unit (ESU), introduced in 1950. Manufactured from 1950 to 1955 and re-issued by Herman Miller since 1998. 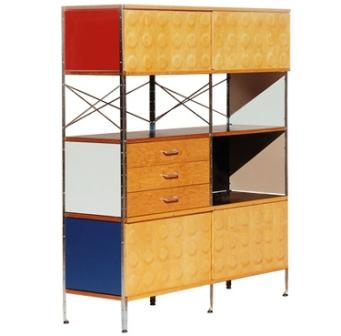 The Eames Lounge and Ottoman was the Eames’ first luxury chair. The Eames Lounge Chair is probably the most famous mass produced piece of American furniture. A classic of mid-century design and one of the most widely recognized designs by Charles and Ray Eames. At the time, Herman Miller used brilliant high-end marketing to create a feeling of exclusivity around it. Since its introduction, the Eames Lounge Chair has been in continuous production for over 5 decades by Herman Miller in America and by VITRA for the European market. Other furniture companies began to copy the chair’s design; some copies were direct knockoffs, while others were merely ‘influenced’ by the design. Through the web you may also find a large variety of inferior copies offered by some Chinese as well as European companies.

Isamu Noguchi began his collaboration with Herman Miller in 1947 when he joined with George Nelson, Paul László and Charles & Ray Eames to produce the Herman Miller Catalog containing what is often considered to be the most influential body of modern furniture ever produced, including the iconic Noguchi table. Originally issued in 1947, the Noguchi table became one of Herman Miller’s most iconic and successful designs. Production ceased in 1973, and the piece became an instant collectible. Herman Miller reissued it in 1980 in a limited edition of about 480 tables. The table was reintroduced again in 1984 for the “Herman Miller Classics” line, and has been in continual production ever since.

Currently Herman Miller, Inc. is one of the largest manufacturers of office furniture and owns the rights to reproduce many great American classics. What started with the idea of affordable, mass-produced, well-designed furniture for the post-war period, through the time looks like the whole essence of this ideal has been lost. All the series of re-issues, re-introductions and Modern Collections of these cheap and affordable designs (nowadays very expensive for a mass production article) prove that a comprehensive marketing and consumer education has been successful for Herman Miller, Inc. to the point that in order to avoid spending money in exotic precious woods that can be purchased in controlled and eco friendly engineered plantations, now they have come with the marketing propaganda of an “environmentally friendly company”.

According to the legend, one day Gilbert Rohde approached D.J. De Pree and told him that he was reproducing furniture stolen of earlier makers and concealing shoddy joinery and convinced him that that was dishonest.

I wonder why the designs of Gilbert Rohde have not been reproduced or brought to the “Modern Classics Collection” and I find that the list of materials used by Mr. Rohde looks like this: “the various woods he employed in his pieces, noted by Leslie Piña in her preface to a reprint of the 1939 Herman Miller catalogue, gives a hint of Rohde’s prolific imagination: East India Rosewood, Brazilian Rosewood, Sequoia Burl, Walnut Burl, Mardou Burl, Quilted Maple, Macassar Ebony, Paldao with quilted Maple, Walnut with Bleached Maple, White Acer with Black Walnut, etc.”

As a result we can consider that it is always more comfortable for the company to have a low cost production and selling at high prices than re-issue furniture pieces of the man who saved this company in the 1930´s. A self-taught furniture designer who visited in 1927 Paris and the Bauhaus in Dessau, Germany, came back to America and started producing furniture of great quality and design. He opened his own design firm and the stardom arrived when he was enrolled by D.J. De Pree. The numerous designs of extreme quality that he masterminded in more compact sizes accordingly to the household dimensions of the time, the use of the former list of materials and the inclusion of bronze, steel, Bakelite, leather, Plexiglas, Lucite, etc. turned the old-fashioned Herman Miller into the innovative and updated company that apparently forgot that Gilbert Rohde set the grounds to embrace the American modernism and that unfortunately he could not lead it through this new era due to his early departure at age 50. It is a pity that he has been under-appreciated, ignored and neglected.

But do not worry; you are a well educated consumer and power words like “exclusive”, “Limited Edition”, “Master´s Collection”, “Anniversary Issue”, etc. affects your behavior and maybe soon you will have available the very “last series” of a rosewood version of the Eames Lounge Chair and Ottoman that eventually in some years will be re-introduced into regular mass-production. A re-issue of Rohde´s furniture pieces, no way!! That is far beyond the comfort zone of Herman Miller.