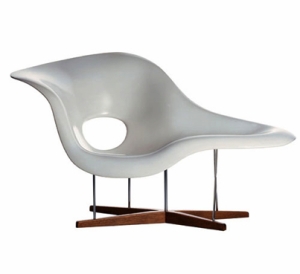 Charles and Ray Eames designed “La Chaise” Chaise Longue for the 1948 “International Competition for Low-Cost Furniture Design” at the MoMa in New York, inspired by “Floating Figure”, a sculpture by Gaston Lachaise. It is the elegance of this assertive seating sculpture that enables any number of sitting and reclining positions, which is so appealing. It has long since established itself as an icon of Organic Design. Two bonded fiberglass shells, chromed rod base with natural oak cruciform foot. Too complex to manufacture at the time, it was finally put into production by Vitra in 1990. “La Chaise” became a symbol of the mid-1990´s revival of interest in mid-20th century modernism when the fashion designer Tom Ford, featured his own chair in a 1995 advertising campaign for Gucci.