Juan O’Gorman, famous Mexican painter, muralist and architect. Juan was the elder son of an Irish mining engineer and painter who settled down in Mexico back in 1895. O’Gorman was one of first Mexican architects to break with traditional Mexican style. Influenced by Le Corbusier and other European Modernists, he produced some of the first examples of functionalist architecture in Mexico. One of O’Gorman´s early commissions was the house and studio for renowned painters Diego Rivera and Frida Kahlo, built in 1931-32. As O’Gorman matured he became disenchanted with functionalism and temporarily abandoned architectural practice, devoting himself entirely to the mural painting. But he returned to architecture in the early 1950’s inspired by the works of Frank Lloyd Wright; he advocated a form of organic architecture and integrated vernacular forms and detailing with modern structural and spatial arrangements to achieve a culturally, socially, and environmentally significant architecture.

O’Gorman painted a number of well-known murals in Mexico City, making him a member of the generation of renowned Mexican muralists that followed the big 3: Diego Rivera, David Alfaro Siqueiros and José Clemente Orozco. His paintings often treated Mexican history, landscape and legends. O’Gorman’s most notable work however is the monumental mosaic on the walls of the UNAM Library (1953). This is the world’s largest mural with more than 3 million pieces of naturally-colored stones and glass, which took 2 years to complete and covers all 4 walls of the building.

Some of O’Gorman´s early design ideas were austere and visibly influenced by Le Corbusier, later he created some very exquisite mosaic designs translated into beautiful furniture pieces like the coffee table shown below. 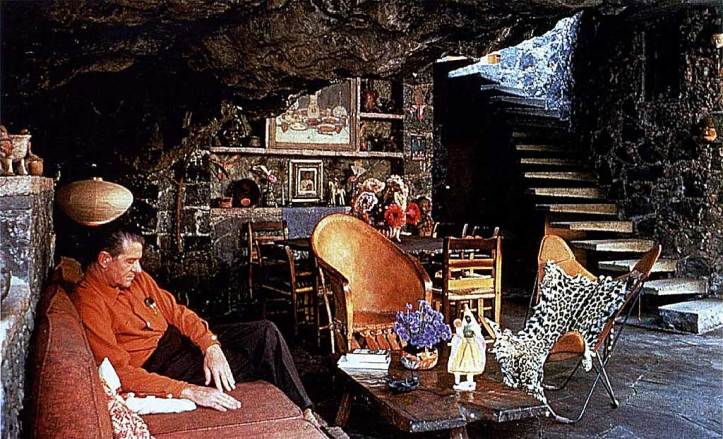 Mathias Goeritz was a well-known painter, sculptor and designer of German origin. After spending much of the 1940’s in North Africa and Spain, Goeritz and his wife photographer Marianne Gast, immigrated to Mexico in 1949. In 1953 Goeritz published the “Arquitectura Emocional” manifesto where he declared that “architecture’s principal function is emotion”. Luis Barragán adopted the term and it influenced his work. The Mathias Goeritz – Luis Barragán professional relationship and friendship lasted almost 17 years; they were united – among other things – by a mutual admiration for the Bauhaus, the Moorish and Mediterranean architecture and they incorporated Euro-American Modernist design into the existing Mexican landscape and color scheme, creating a unique and exhilarating new design style in Mexico. They worked together in the project Torres de Satélite (1957–58) guided by Goeritz’s “Emotional Architecture” principles; however, the authorship of this project would ultimately lead to a dispute that would end their collaboration and friendship

Goeritz defended a stance of anonymity and the absence of vanity in regards to his labor, adopting a total and disinterested dedication, like the craftsmen of the past had done. He exhibited widely in Mexico and beyond throughout his life, and he had a significant influence on younger Mexican artists such as Helen Escobedo and Pedro Friedeberg. His rebellious nature and vigorous promotion of the avant-garde made him a leading figure in the development of Modern Art in Mexico.

Regarding Goeritz’ furniture designs, he created some remarkable pieces on commission including complete dining room and living room sets. However, I will not publish the dining room set and service cart that I have in my private collection to avoid forgers from producing cheap knock-offs.

Mexican artist María Lagunes, born in Veracruz, is recognized for opening the path of contemporary experimentation in the artistic expressions of the 60’s and 70’s. The French government gave her a scholarship in 1966 to study the integration of sculpture with architecture and urbanism. She also had the chance to study engraving with Japanese artists and experimental ceramics with famous Mexican artist Juan Soriano. In 1973 she was invited to exhibit at the Le Salon de Mai in the Museum of Modern Art in Paris, and was invited back on several occasions, most recently in the year 2000. She also deserves special mention for her participation in 2005 in the revitalization of the Roman Theater of Spoleto (Umbria, Italy). Over the years, her characteristic language evolved from naturalistic forms (human, animal, vegetable) to geometric volumes, depending on the materials chosen: steel, wood, marble, onyx or bronze, this last one (her favorite), is used for most of her creations – but she has also experimented with fiberglass, textiles, metal mesh and recycled materials.

Since her first solo exhibition in 1965, the theme of the city and the man has pervaded her work. The city, the people, the constant flow, the conglomeration are themes captured with ingenuity and shrewdness in each of Lagunes’ works. Her unique work covers sculptures, drawings, paintings and tapestry, which can be found in many public and private collections in Europe and America. I am a profound admirer of her work and her tireless creativity; we have spent many hours together, and she has tried (with a lot of patience) to teach me the very first steps on sculptural forms. I experimented with a wax plaster model she asked me to assemble; when I finally managed somehow to put it together it ended up looking like a “wrapped-up baby”. 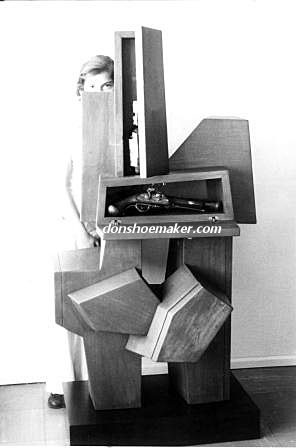 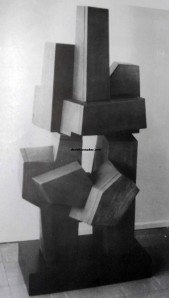 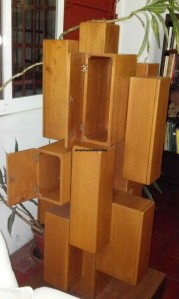