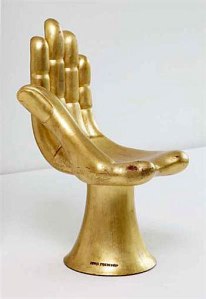 The iconic Hand Chair with gold leaf finish. Mexican mahogany. Side of base incised with “PEDRO FRIEDEBERG.” Without a doubt, Pedro Friedeberg’s most famous invention is this chair in the shape of a hand, carved from wood and then lacquered, painted, or gilded. In its first incarnation, the base of the Hand-Chair consisted of a simple conical form. In later versions, the base morphed into an enormous foot or a more complicated tripod. Though Friedeberg originally thought of the hands as unique sculptures rather than furnishings to be mass-produced, suddenly everyone wanted copies, including such 60’s swingers as Yul Brynner, Roman Polanski and Jeanne Moreau.