What is the difference between a Mexican Campeche Chair and a Butaque? – Part 2

Furniture commonly used in the 16th Century Mexico was Spanish in style, but adapted by native craftsmen, it acquired distinctive characteristics. Popular at the beginning of the Colonial era were the bargueños, chests, beds, benches, chairs, tables, trunks, boxes, and carved frames. In the history of Mexican marquetry furniture, outstanding pieces were produced in Mexico City, Puebla, Tlaxcala, Oaxaca, Campeche and Durango. The first inventory listings with mention of such furniture are from the early 17th Century.

By the turn of the 18th Century a great number of marquetry furniture was being made throughout Mexico, geometric figures and vegetable forms being the most characteristic motifs. Diverse woods of the various regions were used: balsam, Mexican cherry, mahogany, maple, cedar, orangewood, lemonwood, sapote, pine, mulberry, palisander, granadilla and poplar, among others. Much of Campeche´s artisans work was also decorated with shell inlay and many of their famed writing desks were exported to South America. On the other hand, their famous marquetry inlaid “Campeche” chairs went to the US and the Caribbean. 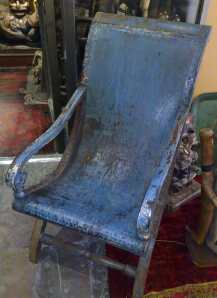 Today, we may still find a great variety of “Butaques” in Mexico. The “Sillas de Campeche” made in the state of Campeche were known for their beautiful marquetry decoration, while at Haciendas, ranches and Colonial residences in Jalisco, the chair is called “Miguelito” chair. This version however, even if it is similar to a “Silla de Campeche”, the design is more simple and austere. In Tehuantepec, they are made entirely of wood, with cross-slats giving shape to the back and seat. Butaques from the state of Veracruz had caned-seats, making them ideal for the hot and humid climate; and those from the Yucatán Peninsula are made with cowhide or deerskin, sometimes decorated across the top with elegant low-relief carvings.

to be continued in part # 3