The perfect finale for the Porset-Barragán-Sordo Madaleno butaque chair designs chapter is Mexican muralist, painter and designer Xavier Guerrero. Guerrero was Clara Porset’s silent partner, the quiet husband who was behind many of Clara Porset’s iconic furniture designs, including some of her best known butaca chair designs, as presented at the recent Xavier Guerrero Exhibit – Museo Casa Estudio Diego Rivera & Frida Kahlo in Mexico City:

Prominent Mexican architect Ricardo Legorreta started his career in the shadow of Mexican modernist José Villagrán; however, by his mid-career he had become far more prolific than any other Mexican architect, landing work as far afield as London, Australia, Japan and Qatar. Legorreta’s architecture has been described as Mexican minimalism and Mexican modernism; his mature style combined many of the aspects of the International Style with elements derived from the climate, colors, and architectural history of Mexico.

Whereas Barragán will be remembered as a designer of domestic spaces and housing developments, like El Pedregal de San Angel in Mexico City, Legorreta will be remembered as a master of large public spaces, from Pershing Square in Los Angeles (1993) to the Managua Cathedral (1994) in Nicaragua, and a long list of many other well-known international projects, placing Mexican architecture on the world map.

Among his best-known works in Mexico is the deep pink and yellow-fronted Camino Real hotel in Mexico City, which was designed to attract visitors to the 1968 Summer Olympic Games. Among the most famous private homes he designed were one for his friend and fellow Mexican, Hollywood actor Ricardo Montalbán, in the Hollywood Hills, and another for Chicago philanthropist Cindy Pritzker, a renowned supporter of architects. Legorreta’s interior designs frequently included Butaca Chairs and Benches, here we have some of them furnishing the entrance and lobby of the Camino Real hotel in Mexico City: 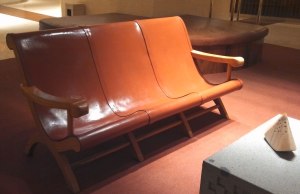 Another noteworthy Mexican architect is Manuel Parra. Parra´s work is completely atypical compared to that of the other Mexican architects from his generation. Parra’s work spans from the 1930’s through the 1990’s and consists of many “casas” he built in Mexico City, primarily in Coyoacán and San Angel. His creations display a collection of fragments from a multitude of origins. He was a pioneer in the recycling of construction and demolition debris, he employed materials such as brick, tiles, wood, local volcanic rock, iron and, preferably, the remains of demolished Colonial buildings. These eclectic combinations became the fingerprints of his designs.

Parra was also a movie set designer, painter, sculptor, potter, and he designed furniture. Parra´s architectural work represents the Mexicanismo movement at its best, and his furniture designs would always include butaque chairs; essential pieces of furniture in his interior designs for the houses he built or refurbished.

Manuel Parra would only commit to build a house for somebody he liked. The legend says, that he built over 800 residences during his career, including Haciendas in the State of Morelos, gorgeous private homes in San Angel, Coyoacán, San Jerónimo, Chimalistac, Las Lomas and El Pedregal in Mexico City; in resorts like Acapulco, Colonial cities like León and San Miguel de Allende in Central Mexico, and in many other parts of Mexico, as well as in southern U.S.A.

Then, the last push of the Mexican Butaque Chair fever came with Mexican painter, graphic designer and artisan Alejandro Rangel Hidalgo, who deserves to be mentioned for his iconic “Rangelino” Butaca designs: Rangel Hidalgo lived and worked most of his life at his family’s property called the Nogueras Hacienda in Comala, Colima. His best known work involved the designing of Christmas cards for UNICEF and the New York Graphic Society in the 1960’s, but he is also well-known for his furniture designs and promotion of traditional handcrafts.

In 1970, Rangel and one of his brothers obtained federal funding and founded the School of Artisans in Comala, where he taught design, painting and furniture making. Over 7 years, the school taught about 300 local artisans adding classes such as wood working, iron working, leather working, gold leaf application and furniture finishing. When he died, he bequeathed the Hacienda to the University of Colima, which converted it into the Centro Universitario de Estudios e Investigación, an Ecological Park and the Alejandro Rangel Hidalgo Museum. The name Alejandro Rangel Hidalgo is clearly identified with his style, now called ‘Rangelino’.

Many Mexican embassies and presidential homes are proud to showcase Rangel Hidalgo´s furniture and artwork. Here some perfect samples of his “butacas” with the typical “Rangelino” hand painted head supports: 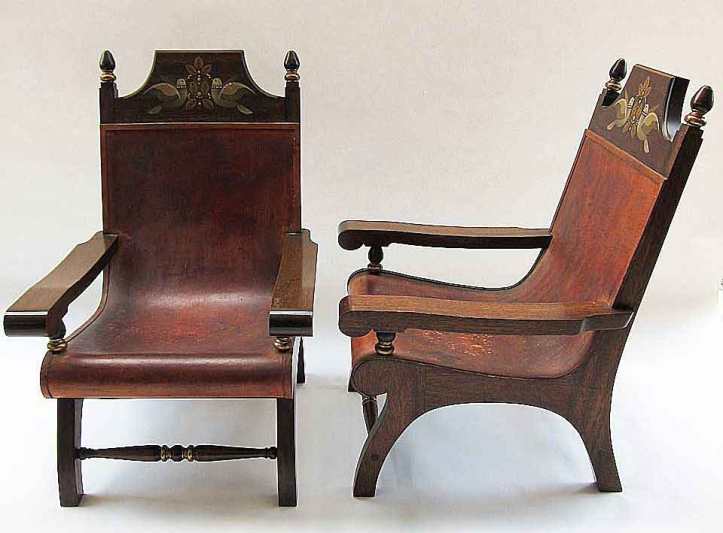 to be continued in part # 6