Furthermore to the unfortunate Don S. Shoemaker exhibition of fakes, forgeries and attributions at the Mexico City Museo de Arte Moderno, I will share with you some anecdotal occurrences that I discovered when I went through the reading of the exhibition catalogue: 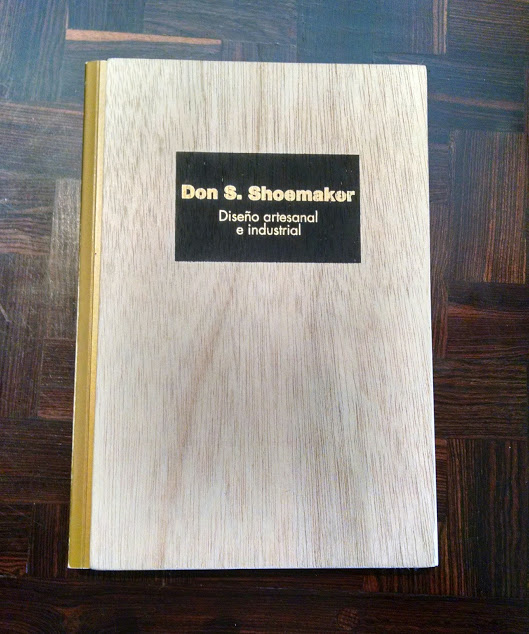 Among many pages of boring, mediocre and irrelevant data combined with an obvious lack of knowledge about the designer´s life and his oeuvre, the curator & writer of the catalogue presents a bizarre fabricated biography, misrepresenting events and misleading the reader completely about our designer´s personality and his spirit. I have picked some extracts from the biography (literally translated into English from the Spanish text), with my comments to each selected paragraph:

“Don Stanley Shoemaker Lohr (Nebraska, U.S.A., 22.01.1919 – Morelia, Michoacan, 20.05.1990) studied Art at the prestigious Art Institute of Chicago, with the help of his uncle Edwin Perkins (creator of the famous flavored beverage KOOL AID, one of the first soluble powders in the commercial food industry ambit). Later he enrolled into the Navy, to the 15th Engineer Combat Battalion; he was part of the historic Battle of Normandy at the Beach of Utah, one of the bloodiest fronts in the war, experience that would leave a lifetime mark on him. He was made prisoner by the Germans and sent to a Concentration Camp in France; by the end of 1945 he was liberated by General´s George Patton 3rd regiment. He was awarded with the Purple Heart and the Victory Cross.”

The biographical research work made by the MAM´s curatorial team was less than professional, historical events were deliberately distorted. Was the idea to write an entertaining novel or is it just a literary forgery with a fabricated biography of an artist, presented as a fact?

Text: “An unavoidable first question to make is: ¿How does Don Shoemaker arrive to Mexico and why he settles down in Morelia? By the end of the war Edwin Perkins inherited the stocks of KOOL AID to him, at the time that it was sold to GENERAL FOODS. This would allow him in the future to keep re-investing stocks for the rest of his life in different stock market businesses (from General Motors to Opal Mines in Australia), but above all, at that moment Shoemaker was able at last to dispose of sufficient capital to embark upon his dream of traveling through Latin America. Although he would not get too far, because same as happened to many other travelers in our country, like Edward James or Frank Kyle, he felt in love with Mexico and very soon settles down in Morelia together with his wife Barbara. By 1947 he established a wood button factory.”

The coming down to earth reality:

Note: the writer has very little knowledge on when and where Don and his wife Barbara settled down when they arrived in Mexico. The MAM vehemently claimed that the field investigation performed by their curatorial team was extensive, profound and conclusive, and that it was mainly focused on an IMMENSE photographic archive that the family owns, and also supported by a far bigger archive, which evidently was useless, right? As I have already stated in my previous post on this issue, the immense photographic archive that allegedly the curator´s work and research was supported by, actually was based on a shoe box that contained no more than 60 photographs, a few letters and some catalogue flyers of the SEÑAL, S.A.

Text: “Towards 1950 Shoemaker founded the SEÑAL, S.A. factory and starts to experiment in furniture design and manufacturing, although, due to a workers strike in 1955 he closes the factory and temporarily moves to New York. In 1960 Shoemaker comes back to Michoacan, to settle down for the rest of his life in Santa María de Guido, by that time a far suburb of the City of Morelia. There he re-assumes the furniture production, also he will start the production of complex marquetry wood floors; he began taking control over the early chain of production of the sawmill, and he takes advantage of it to export tropical hardwoods. This is the consolidation point of his most emblematic work: he designs furniture non stop, increasing his sales catalogue at the same time that he improvises the quantity of unique pieces, he creates the Sling Chair, his most iconic piece and starts using the wood remnants to manufacture the gifts line and smaller utility objects (like office articles, kitchen utensils, jewel boxes, ashtrays, buttons, etc.).”

“For several years the sawmill (part of the factory) prepared complete trunks and planks of precious tropical hardwoods for delivery to other parts of the world, like ongoing lots of cocobolo to Japan.”

Not actually the case, quite another story:

Our lousy biography author did not understand at all the furniture production process at SEÑAL, S.A. and its daily challenges.

Text: “Until the end of the 1970’s he is consumed by his work, while every day at 16:00 hrs. sharp he paints, (his heirs keep about 70 paintings, almost all of them in a medium size), practice that until the late 1980´s he exercised as a dilettante, at the same time as the serigraphy; the copies where on sale also at the SEÑAL, S.A. store (his family keeps at least 18 different proposals or graphics between lithography and serigraphy, besides some drawings). Compared to his furniture designs and his wood sculptures, most of Shoemaker´s paintings do not show any personal style nor do they carry any distinguishable evolution, it seems that his production was more hobby oriented and was inspired from other artists or movements to the point to imitate them openly, although generating an eclectic corps of paintings, they reveal a very cultivated curiosity for the painting history. This is how he made his version of the surrealistic “Vasos Comunicantes” from Diego Rivera or reinterprets the “Three Graces Myth”, being able to transit from a maternity of impressionist execution to a lyric abstraction, going through very naive mystic scenes, abject monstrosities, geometric-sized vegetable patterns, religious scenes of strong expressionism or picturesque landscapes.”

Our false biography writer notes that Don´s painting production was hobby oriented. Mmmmm. We should not forget about the fact that Don studied painting at the Fine Arts Institute in Chicago. However, our writer overslept that part, he only discovered that Don studied “Art”.

Text: “When Don Shoemaker died of an hearth attack in 1990, (even though he suffered from Parkinson for a long time before, which explains why his signature was not always the same), his son George gave continuity to the factory (to whom, together with his grandchildren Stanley and George Jr. he had already donated since 1988 the company´s stocks). George would produce new series (although limited) from old prototypes of his father, he would re-adapt some others in format (for example armchairs that Don had conceived for 1 person, George would develop the 2 and 3-seater versions) and he would design a few new objects himself, many of them marketed under the label “Arrendadora Shoemaker”, which specifies “Produced and/or designed by Shoemaker”, besides the complete address of the factory in Santa Maria de Guido. George died young in the year 2005, and even though the company was dissolved, his two sons Stanley and George Jr. would re-assume their grandfather´s legacy. Although they have designed some new models by themselves, for the time being they have decided that they would re-edit no more any of Don Shoemaker´s models, unless maybe in a future for personal use or maybe for a very special commemorative occasion.”

Again, here we have some remarkable biographical inconsistencies and misinterpretations of the truth. The “field investigation” or even better, “field day” investigation performed by the MAM curatorial team shown at its best! Besides all the fakes, forgeries, attributions, etc. published in the catalogue, we also have been graced with a false Don S. Shoemaker biography.