Also an important part of Mexico´s rich 20th century design history has to be credited to the furniture production that came from the Yucatan Peninsula:

Regil de Yucatán, a furniture company active in the Yucatan Peninsula, was known for its quality artisan furniture pieces produced in mahogany and cedar woods during the 1950’s. At that time, the company commissioned American interior designer Charles W. Allen, with a “Contemporary Furniture Line”, targeted to satisfy the taste of the American market.

Allen´s contemporary line made its way to Chicago and New York, and to Mexico City through the DECOR,  S.A. showroom located on the elegant Reforma Avenue. Charles W. Allen, who was an “aficionado” of the native woods and natural finishes found in Yucatan, certainly achieved a smooth, sculptured effect with this sui generis furniture line made in solid mahogany wood including hand-woven sisal and bright polished brass fittings.

Another flash into Mexico´s Mid-century furniture history from the same geographical area:

In the early 1950’s, the Mexican government granted a massive mahogany concession to “Maderas Industrializadas de Quintana Roo” (MIQRO); in 1959, the government actually took over ownership of this enterprise. This concession, covering 550,000 hectares had exclusive wood harvesting rights over both national and ejidal lands* in the southern parts of the state of Quintana Roo. When the MIQRO timbering concession expired in 1982, it was not renewed.

*The ejido system is the main legal mechanism under which Mexico has granted land and resource utilization rights to communities since 1942.

So there is a very high chance that you may find furniture pieces from the 1950’s and 1960’s produced in mahogany wood carrying the MIQRO stamp, however, that does not mean that you just “discovered” a new important Mexican designer studio signed MIQRO! 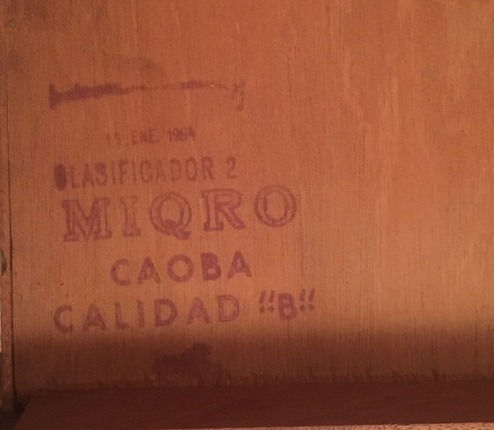